HomeNewsIndustry-newsThe Past of Water Pump...

Water pumps are machines that transport or pressurize liquids. It transmits the mechanical energy of the prime mover or other external energy to the liquid, which increases the energy of the liquid. Water pumps are mainly used to transport liquids including water, oil, acid and alkali liquids, emulsions, suspension emulsions and liquid metals. They can also transport liquids, gas mixtures and liquids containing suspended solids. The improvement of water is very important for human life and production. There have been various water-lifting devices in ancient times, such as chain pumps in Egypt (17th century BC), orange tarts in China (17th century BC), cormorants (11th century BC), and waterwheels (1st century AD).

The past of water pump as following.

1. The earliest pumps appeared around 300 BC. Archimedes invented a pump called the Archimedes type screw pump, which is still produced by manufacturers.

2. The pressure pump invented by the ancient Greek Ctesibius (285-222 BC) is one of the most primitive piston pumps. It is mainly used to produce water column and lift from wellhead. (It is still preserved on ancient Roman sites, such as in Silchester, England).

3. The square plate chain pump appeared in the history of the North and South Dynasties in China as a chain pump is an important invention of pump machinery.

4. In 1475, the Italian Renaissance engineer Francesco Di Giorgio Martini proposed the original model of the centrifugal pump in the paper.

5. In 1588, the Italian, Agostino Ramelli, published "Captain Agostino Ramelli's Ingenious Mechanical Devices" at his own expense. (This book details many tools and machinery that have been successfully manufactured and become commodities after two or three hundred years). There are descriptions of chain pumps, water pumps, and vane pumps.

7. In 1635, the German scholar Daniel Schwenter described the gear pump.

8. In 1650, Otto von Glick, the mayor of Madenburg, Germany, invented the first air pump. After continuous improvement, he designed a vacuum pump in 1654. 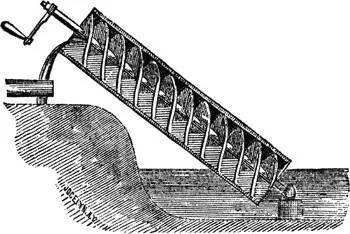 10. In 1675, Sir Samuel Morland, the royal mechanic of King Charles II of the United Kingdom, was granted a patent for a plunger pump, for pond drainage and fire fighting.

13. In 1689, Dennis Pappan invented a volute centrifugal pump with a straight blade, and a curved blade was invented by the British inventor John Appold in 1851.

14. In 1720, the use of plunger pumps began in the water supply system of the city of London.

15. In 1732, the British Gosset and Deville invented the diaphragm pump.

16. In 1738, the Dutchman Daniel Bernoulli's "Hydrodynamique" (fluid mechanics) was published and the Bernoulli equation was proposed.

17. In 1755, the work of the Swiss Leonhard Euler proposed the basic equations and continuous equations of ideal fluids. The theoretical foundation of centrifugal pump design is laid.

19. In 1768, William Cole improved and introduced the chain pump in the bilge of the ship.

20. In 1772, the Swedish scholar Emmanuel Swedenberg proposed the design of a mercury vacuum pump.

23. In 1849, American Henry Worthington invented the direct-acting steam pump, which is the simplest piston pump.

24. In 1852, Lord Thomson of Lord Kelvin in England proposed the idea of a heat pump.

26. In 1857, Charles Henry Murray of the United Kingdom patented a chain pump.

27. In 1865, a mercury vacuum pump was invented to solve the problem of carbon filament bulbs.

28. In 1868, Stork Pompen was founded in Hengelo, the Netherlands, and invented the concrete volute pump.

29. In 1870, the British William Thomson proposed the design of a jet pump.

31. In 1877, Shone used air pumps for sewage treatment in England: including ejectors.

34. In 1892, Worthington Company of the United States manufactured an oil pump for the world's first oil pipe (from Pennsylvania to New York).

39. In 1909, W. Gaede invented the rotary vane pump and obtained a German patent.

42. In 1918, Byron Jackson Company of the United States manufactured a heat oil pump for the petroleum industry.

46. In 1929, the Dutch company Houttuin manufactured the first twin-screw pump in Europe. Byron Jackson manufactures double-shell feed pumps for use in power plants.

47. In 1931, the Swedish IMO company invented and manufactured the three-screw pump.

48. In 1932, the French engineer Moineau invented the single-screw pump (also called Mono pump), and the product was made by the German PCM pump company.

51. In 1937, Ingersoll Rand Dresser (IDP) designed and manufactured a process pump with radial separation and pulling from the back. 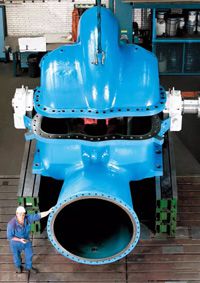 56. In 1953, the Byron Jackson Company manufactured a recirculation pump for the Nautilus nuclear submarine. Durco produces a rear-pull chemical process pump that is the precursor to the ANSI standard.

57. In 1958, W. Baker of the Federal Republic of Germany first proposed a turbomolecular pump of practical value, and molecular pumps of various structures have subsequently appeared.

62. In 1969, the United States Ingersoll Rand Dresser designed and manufactured the world's largest boiler feed pump with a power of 52200kW (70,000 horsepower).

63. In the 1870s, Kobe manufactured a commercial rotary jet pump.

64. In 1972, the Pacific Company in the United States manufactured a nuclear reactor feed pump suitable for atomic power generation, with a forged casing.

65. In 1976, the United States Ingersoll Rand Dresser manufactured the world's largest vertical drainage pump to date with a rated flow of 180,000 m3 / h.

70. In 1992, the United States Ingersoll Rand Dresser designed and manufactured the largest pipeline pump in the world, with a power of 27590kW (37,000 horsepower), and was driven by an air turbine engine.

71. In 2000, the American HMD company manufactured a shielded magnetic drive pump, which is a leak-free pump 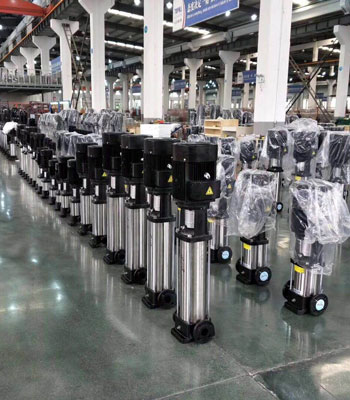